As we battle through this extended, special edition episode of The Krypton Factor that is parenting, you come across all kinds of people. People who, until now, you may have overlooked or not been aware of. Strangers who are all up in your bizniz in the street because you kid is barefoot in the pram, old bints in Tesco who comment on the gigantic size of your bump (yup, it even starts before the child has come out of your bod) and numerous other examples of humanity that you’d enjoy kicking in the head.

Then we discover another breed of individual known as ‘The Other Parent’.

It has to be said that the majority of other mums, dads and grandparents that you meet are fantastic people. But sadly, like most things in life, those are the people we don’t notice so much. The ones who stick out like a sore thumb are the irritating ones.

My advice is that when you find a normal, brilliant other parent, hold on for them for dear life and never let them go because these dudes are a dying breed and we need them around us.

The One Whose Kid Does Everything Better Than Yours

If your child has managed to tie her shoe laces for the first time, theirs has been doing it since they were newborn. If your child is a fussy eater and you’re having trouble getting them to ingest anything that isn’t a chicken nugget, theirs eats five-course organic meals and superfood smoothies. Cross the road when you see these people.

The One Who Tries To Flog You Tat

From ugly, badly-glue-gunned things to hang on your door to their nephew who can tattoo you in his bedroom for a fiver, this specific type of parent varies from country to country, but the principle is the same; they constantly try and sell you stuff, get you involved in pyramid schemes or know someone who can get it cheaper. They take one look at your daughter’s new pair of trainers and, with a slightly sulky face, sticking-out bottom lip proclaim that you “should have asked them” and that “they know a bloke called Dave who could have sold them to you cheaper”. Another variation is the mother who shows you a carrier bag of her atrocious crafts and guilt trips you into paying a couple of quid for a nasty crocheted bikini top or similar. And let’s not go down the road of those Juice Plus people…

This is the woman whose eyes laser onto that jam stain on your top, or those huge dark circles under your eyes, or those slightly greasy roots, places her hand on your shoulder and – with loads of sincerity – says, “awww! You ok babe? You know I’m here for you!” even though you’ve known each other for five minutes. She probably means well, but she’s as oily as fuck and is definitely judging you.

We all bitch about other people, but this lady is the maximum level. She bitches about every other parent, telling you stories about how Josh in 2C’s mum has had three boob jobs, how Marigold’s dad is having an affair with one of the dinnerladies and “have you seen the state of Milo’s shoes?” but deep down you know she’s probably saying the same things about you and your kid too. These types of parent can be good for a bitch now and again, but be suspicous of the ones who seem to do it by default. You ain’t that special to be left out.

This one is for the teachers out there (holla!) who I guarantee have dealt with one or twenty of these in their careers. It’s parents evening and you need to have that awkward chat with the mum and dad of a naughty little shit in your class. Instead of taking it on the chin and actually considering the fact that the teacher isn’t just gunning for your kid, they turn it onto you, informing you that you are obviously not stimulating them enough or that they are just “gifted” and that makes them play up. And punch other children.  And call their teacher a “Knob’ed!”. Legit.

The Overly Familiar One

They’ve only known you for a month and you don’t have anything in common apart from the fact that your kid gets the same bus as theirs, but they want you to come round for dinner/ask you questions about your reproductive organs/interrogate you as to why you didn’t breastfeed/etc. Just leave me alone.

The One Who Means Well But Gives You Rubbish

This kindly person clearly means well but this is directly connected to hoarders who cannot bear to chuck anything out. They offer to gift you a few items that end up being in the vein of broken toys, worn out clothes, bicycles missing wheels and generally just things that should have been put right in a black binliner. Lady, it’s very kind of you, but if you haven’t used that sticky, broken pushchair in 10 years chances are that I won’t either.

This nasty specimen is specific to social media. You’ll visit their Facebook profile (we all do it) and every other image is some hostile weirdness like this… 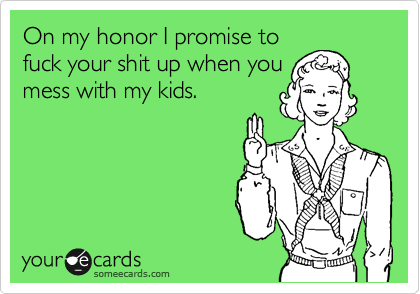 And my personal favourite…

Calm down unresolved-anger-management-issues lady. Why do some parents feel like they need to spell this out to strangers? What kind of paranoid bollocks?

And here are some beautiful examples of other parents from some of my Instagram followers. Hold onto your hats…

The “I Know All Things” Parent

They’ve done it, bought it, tried it… Whatever thing you’ve been through they’ve experienced it twice and are a total expert. That’s amazing, but they share this information with you in that self-righteous way that makes normal parents cringe and run a mile.

The “My Child Has Never Had Sugar” Type

Most commonly uttered sniffily whilst your child is polishing off that packet of Jammy Dodgers right in front of them. Always.

Not to be confused with Attachment Parenting – a parenting style connected to co-sleeping and baby-wearing – but those parents who simply cannot leave their kids for a second. They make you feel guilty and look at you like a freak when you mention that you’re leaving your baby with a sitter for a night or with its grandparents for a week so you and your other half can have a – God forbid! – BREAK! Any mention of you enjoying naptime as a way of switching off from your kid for an hour is met with gasps of horror. Because once we have a kid our own needs are bollocks, right? Eye roll.

Kid is taken to the park to play, parent sits on bench and stares at phone for 45 minutes, ignoring aforementioned child. Child is waiting at school gates with her mum and calling, “Mummy? Mummy? Mummy? Mummy?” whilst the parent scrolls up and down and ignores. Family in restaurant and every member is engrossed in some kind of tablet or smartphone for the entire evening. Depressing as hell.

A huge thank you to everyone who helped make this very salty article possible by contributing your tales of Other Parent Hell! If I didn’t manage to include your response, it’s only because this entry is so long that it’s rivalling War & Peace. Don’t forget to drop me a line if you feel like sharing your examples of annoying parenting.

Hi, I'm Emma! I'm a freelance designer and crafter with a serious love  of yarn. Welcome to my creative space where you can find free tutorials, patterns and plenty of crafty inspiration.